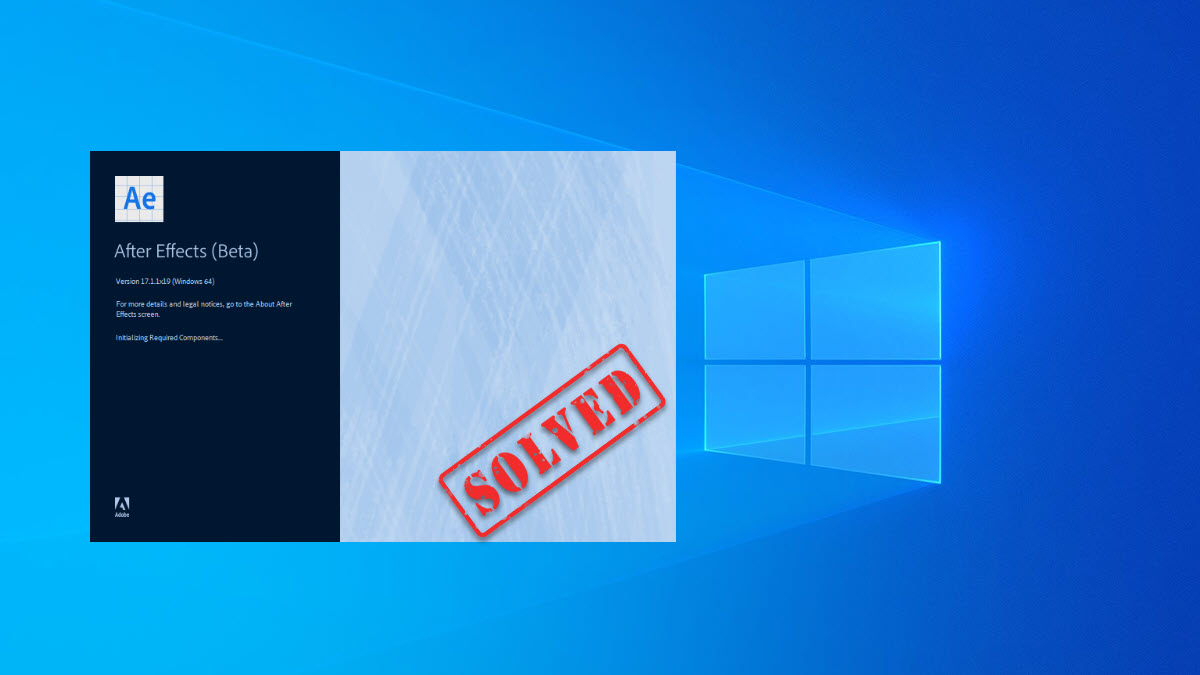 After Effects keeps crashing on your Windows computer? Don’t worry… Although it’s frustrating, you’re definitely not the only one to run into this problem. Lots of Windows users have reported the very same issue recently. The good news is, you’ve landed in the right spot and you should be able to fix it pretty easily.

Although the causes of this issue vary, here we’ve put together some fixes that proved working for many Windows users. You don’t have to try them all. Just work your way through the list until you find the one that does the trick for you.

If After Effects crashes on startup, you need to skip to Fix 2 to update your graphics driver first.

After you switched to CPU for fast previews, After Effects may take more time for fast previews, but it would reduce the possibilities of random crashes. If this fix doesn’t work for you, don’t worry. Try the next fix below to update your graphics driver.

In most cases, the broken or outdated graphics driver is the main culprit behind the After Effects crashing issues.

If you haven’t updated your graphics driver for a long time, or if the graphics driver file is broken or corrupted, you may suffer from the program crashing, stuttering, and even screen flickering issues.

Graphics card manufacturers like Nvidia, AMD and Intel keeps updating their graphics drivers. By doing that, they’ll fix bugs in the last version of graphics driver and enhance the graphics card performance. Sometimes, they also provides support for the new features in creative applications. For example:

In other words, the latest graphics driver will unlock the full potential of your graphics card and give you a better experience for creating and gaming.

Launch After Effects to see if it would crash or not. Normally, after you updated the graphics driver, the crashing issue will disappear.

After Effect is a demanding (resource intensive) application. It may crash if your computer is running out of memory, or if your hard disk drive is almost full. To get After Effects work again, you can try purging memory and cache. Here is how to do it:

If After Effects works well after you purged memory and disk cache, it may suggests that currently your computer doesn’t has sufficient RAM or storage for After Effects to run properly and you may need to upgrade the memory or storage to prevent crashes due to insufficient resources in the future.

Fix 4: Delete the temp folder of After Effects

If After Effects still crashes, try the next fix, below.

Codecs are used to encode and decode your video files in After Effects. When codecs are corrupted or installed incorrectly, it may trigger the After Effects crashing issue. To fix crashing caused by codecs, you should try reinstall or update them.

Some incompatible plugins would also crash After Effects. Before installing a 3rd party plugin, you need ensure it is 100% compatible with both your version of After Effects and other plugins. If you’ve installed a new plugin recently, try deactivating it to see if it is the crashing culprit. If it doesn’t help, you may need to reinstall After Effects.

Hopefully, this article helped you resolved After Effects crashing issue. If you have nay questions or suggestions on this topic, feel free to leave us a comment below. Thanks for reading!