What is Steem and how does it work?

Sophie Luo
Last Updated: 3 years ago
0
Before we get to know more about STEEM, we should know something about Steemit, a social network which allows users to discuss and read, just like Reddit. But unlike Reddit, Steemit pays its content creators when their work gets upvoted, and people who curate the best content on the site by upvoting others work. Commentators who add to the discussions are paid too. Steem is what makes this process possible.


Steem, a new kind of digital currency, is the fundamental unit of account on the Steem blockchain. All other tokens derive their value from the value of STEEM. In social platform like STEEM, every activity you participated will be rewarded in the form of digital currency. New units of currency are created by the network and distributed to its users. The digital currency units can be exchanged to actual real money, which means that the more you engage, the more you get.


Someone looking to enter the Steem platform will have to buy or sell STEEM. Once STEEM has been purchased, it should be converted to Steem Power or Steem Dollars to mitigate the impact of dilution over the long term.


Steem are the units that are brought and sold for actual money on the open market. You can trade them in the same way as you trade your bitcoins and  your company’s stock. Steem units are created every day, so if you hold on to your Steem units for too long without selling it, they will be diluted and lose their original value.

What is Steem Power?

Steem Power is a a more appropriate way of digital currency if you are looking for a long term investment because you cannot sell Steem Power units for two years. Your STEEM can be converted to Steem Power. The higher Steem Power you have, the easier for the topics that you published or joined to get more attention, which means that you are more influential on the site. Therefore, more STEEM earned by you.


Steem wants to build a community that is mostly owned and entirely controlled by those who with a long-term perspectives. Hence, 90% of the Steem Currency will be distributed to the ones who hold Steem Power in the form of additional Steem Power Units, and the other 10% goes to content creators and curators.

Half of the pay you receive for your content will be in Steem Power Units. The other half will be paid in the form of Steem Dollars.

Steem Power cannot be used directly unless it is converted to STEEM. There are some requirements for you to meet if you want to converted Steem Power to STEEM. First, you need to have 10 times of the Steem Power than you first registered. Second, the transfer request will start  over 104 equal weekly payments. In this way, Steem Powers prevent massive price swings and volatility on the open markets.


What is Steem Dollars?


Steem Dollars are the third and final forms of the currency and never get diluted or lose their value. They are designed to be a stable currency that you can sell whenever you want.

The value of one Steem Dollar roughly equal to actual one dollar. Steem Dollars could be viewed as a short term savings. It takes only seven days for the Steem Dollars to be transferred to Steem. You can also get certain interests when you are holding Steem Dollars.

How to earn STEEM?

1) New registered uses can have five Steem Power for free.

2) Publish new topics and participate in discussion of other topics.

The more attention you are getting, the more original and meaningful of the topic that you published, the more assets that you are creating. (50% of it is Steem Power, 50% of it is Steem Dollars. ) Among the assets, 25% of it will be rewarded to participants and the ratio will be decided according to the clicks that the comment gets.

3) Upvote the new topic can also increase your Steem Power.

4) Steem Power and Steem Dollars can earn you interests.

5) If you are a computer savvy, you can download related programs from STEEM.io to mine and get the reward.

6) If you loan your STEEM to others and be a part of the debit game, then within a specific amount of time, user who have the highest transaction number of times will be rewarded with a STEEM of large amount.

An example of STEEM. Steem Power and Steem Dollars.

https://steem.io/  is a platform that is specialized in STEEM. You could click in and see more detailed information about how STEEM works. 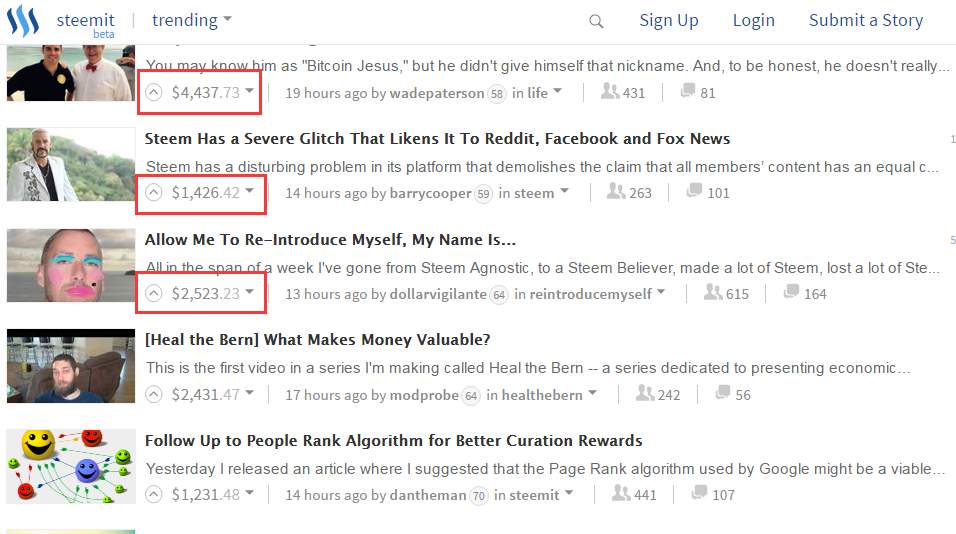 Basically, you can see the dollar sign under each topic, which represent how much STEEM the author is getting from this post.

Click into one of the posts, you will be able to see that participants who take part in the discussion will also be paid a certain amount of STEEM.

How to Update Minecraft Windows 10 Edition

How to Fix Enter Key Not Working Quickly

How to Fix HDMI No Signal Issue

How to Fix ERR_EMPTY_RESPONSE Error on Google Chrome